Despite the long road that lies ahead, after years of lobbying efforts there is finally a shift in the collective mindset of the shipping industry to put more emphasis on its carbon footprint. This report highlights key regulations, actions and initiatives that shape the green shipping narrative. 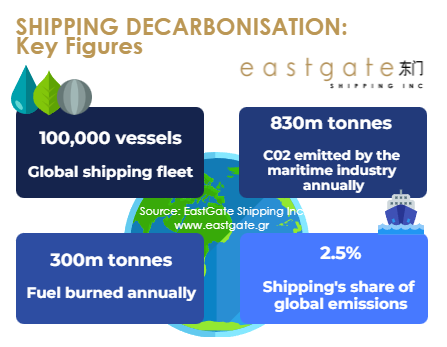 How the shipping industry is evolving towards 2030 and 2050 goals

Shipping is responsible for the transportation of 90% of the world’s trade and contributes to about 2.5% of the global emissions.

2021 ended with total shipping emissions surpassing the 800 million metric tonnes mark, higher than the previous two years; the increase comes against the efforts to reach net zero and is largely attributed to the recovery of the world’s economy, which triggered demand for goods and seaborne trade and eventually generated more maritime emissions.

However, the urgency to reduce emissions is imperative: a study published by the European Parliament has underlined the critical need for more regulations, otherwise the shipping industry would be responsible for nearly 40% of all carbon dioxide emissions by 2050.

While the IMO’s goal is the 50% reduction of shipping GHG emissions by 2050 compared to 2008 levels, the United States have pushed for the agency to adopt a zero emissions target by the same deadline. In 2021, we saw a significant progress in tackling climate change including the introduction of new regulations for the energy efficiency of the world’s fleet that will finalise in 2023.

On 17th June 2021, the IMO adopted amendments to MARPOL Annex VI at MEPC 76, introducing the Efficiency Existing Ship Index (EEXI) and the requirement to reduce Operational Carbon Intensity through the Carbon Intensity Indicator (CII). A month later, in July 2021, the European Commission published the ‘Fit for 55’ package, introducing a set of measures to reduce net emissions by 55% by 2030, using as baseline the year 1990.

In October, a milestone was set with the launch of a new collaborative platform by cargo owners for Zero Emission Vessels (coZEV) facilitated by the Aspen Institute to accelerate shipping’s green future. To that end, nine big companies, including Amazon, Ikea and Unilever, pledged to carry out their cargo transportation with zero carbon fuelled ships only by 2040.

Earlier in February 2022, the One Ocean Summit took place which addressed key themes for the environment, such as the preservation of marine ecosystems and the acceleration of renewables’ capacity. During the Summit works, four of the world’s largest shipping companies, CMA-CGM, Hapag-Lloyd AG, AP Moller-Maersk and MSC, reaffirmed their commitment to zero emissions in their shipping operations by 2030.

How can we speed up shipping decarbonisation?

Various proposals have been put forward as a means to enable the decarbonisation objective.

Slow-steaming is a widely talked about scenario and it is almost self-explanatory that it can efficiently reduce emissions, especially from the older units, but it is a practice usually implemented when the market’s supply and demand imbalance depresses the freight returns.

The carbon intensity indicator rating system may trigger more slow steaming 2023 onwards for the reduction of emissions, but what is perhaps an uncomfortable truth is the fact that the sailing speed of a vessel is more dependent on the freight market’s performance than the noble environmental goals.

Furthermore, environmentalists claim that the inclusion of shipping in the European Emissions Trading System will up the pace of the decarbonisation process. The European Trading System (ETS) launched in 2005 obliges manufacturers, power companies and airlines to buy permits at accost nearing €100 (US$114) for each tonne of carbon dioxide they emit.

The European Commission has already proposed the gradual inclusion from 2023 until 2026, when shipowners will need to pay for all their emissions in the EU and 50% for international voyages that either commence from or end in the EU region.

However, the European Parliament pushes for the inclusion of shipping into the ETS earlier than the year 2025 and proposes the extension of ETS to cover all shipping emissions to and from Europe, if regulatory efforts by the IMO to curb emissions do not meet the target.

Another tool would be the tax on carbon, which will help narrow the gap between fossil fuels and zero emission alternatives. A report by the Getting to Zero Coalition has estimated that a carbon price of around US$200/t is needed for full decarbonisation to be achieved and for the shipping industry to be powered by net zero energy sources by the year 2050.

The director of the Global Maritime Forum said that this level of carbon price is in line with what is estimated by, for instance, the International Energy Agency as needed across all industries to achieve the Paris Agreement goals, indicating that shipping is not a unique case.

The cost of fuel has always been a key consideration for shipping participants and the exploration of alternative fuel solutions is now of critical importance.

As it stands, the industry is still in the process of concluding to an efficient and cost-effective solution to shift away from carbon intensive sources of energy.

The findings in hand have shown that green ammonia appears as the cheapest alternative thus far, though fuels that don’t rely on carbon inputs, like green hydrogen, seem to have an advantage during the period of transition.

The American Bureau of Shipping has categorised the available maritime fuel options for decarbonisation and among them, hydrogen (liquefied LH2 or gaseous H2) was identified as a low to zero carbon fuel that can help meet the IMO GHG reduction target by 2050. Hydrogen offers shipowners and operators a low carbon and low emissions fuel option for potential use in internal combustion engines and fuels.

Green corridors are specific trade routes that link key port hubs creating a zone where zero emission solutions can be put into motion.

The design behind a green corridor is that in those targeted routes specific policies, technologies, regulations and financial incentives can be developed and put into force, showcasing how these can eventually be applied in a larger scale.

The Australia-Japan iron ore route, for example, is viewed as a potential first of the kind. Energy companies in Australia have put into place plans for about 30GW of hydrogen electrolyser capacity by the end of the decade, with the majority located near iron ore production centers and ports.

As the global shipping industry advances its position towards tackling climate change, further action is required to enable the systemic shifts needed.

Next in the agenda for this year are the 78th Marine Environment Protection Meeting Committee (MEPC78) scheduled to take place from 6th to 10th June 2022, at the same dates with the Posidonia 2022 Exhibition, and the MEPC 79 from 12th to 16th December 2022.

And while considerable progress has already been made, there is no doubt that the shipping industry needs to be galvanised into more decisive action in order to achieve a smooth and effective transition into zero emissions and realise the decarbonisation vision.