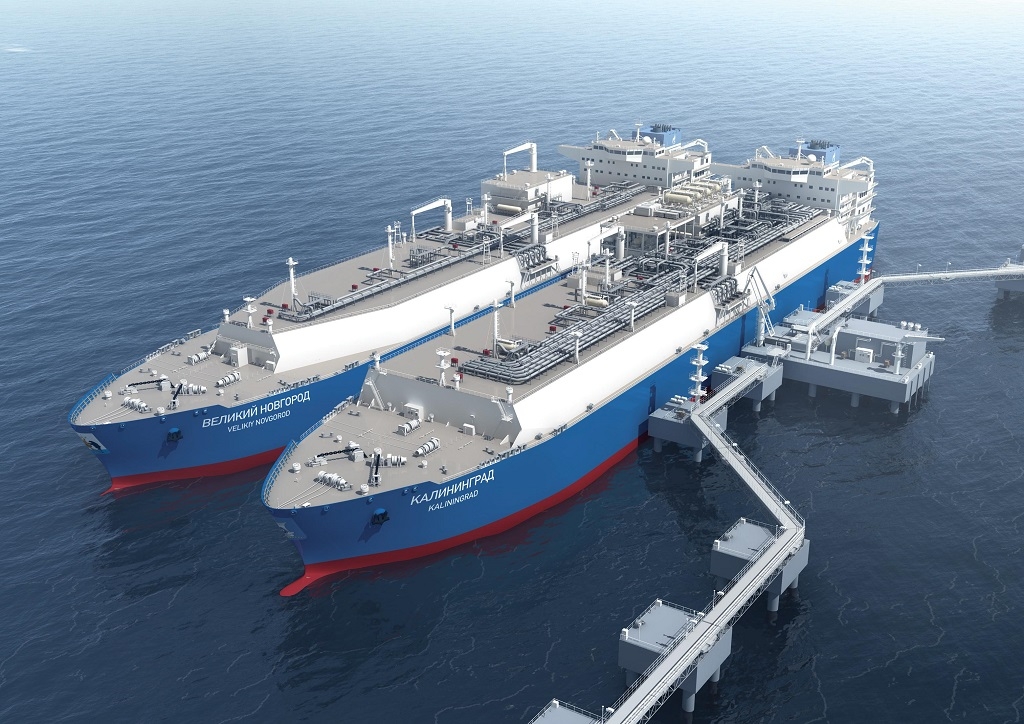 After years building out export capacity and hiring traders, producers of liquefied natural gas and commodity trading houses are seizing on an unprecedented surge in the price of the fuel.

The combination of a severe cold snap in Asia, supply outages and maritime congestion has propelled spot prices for LNG to previously unforeseen heights. The North Asian price benchmark has now risen 18-fold in less than nine months, outperforming other commodities -- even Bitcoin.

Winners in this rally include Exxon Mobil Corp., which sold a cargo last week for a record $130 million to Japan, and Total SE, which secured $126 million on Tuesday in a sale to trading company Trafigura Group. Other producers, such as Royal Dutch Shell Plc and Houston-based Cheniere Energy Inc., are also taking the opportunity to offload consignments that aren’t tied to long-term supply contracts. Owners of LNG tankers, meanwhile, are reaping record charter rates.

The rally is a milestone in the evolution of the global LNG market. While the super-chilled fuel has been around for decades, seaborne volumes have risen considerably in recent years to serve burgeoning power-generation demand in Asia and countries seeking to transition from coal. Many of the world’s largest oil and gas producers have invested tens of billions of dollars in plants that liquefy natural gas prior to export. They’ve also sought to leverage their position as major suppliers by building up sizable trading operations in Singapore, London and elsewhere. Trading houses such as Trafigura Group, Vitol Group and Gunvor Group Ltd. have grabbed a slice of the action as well. 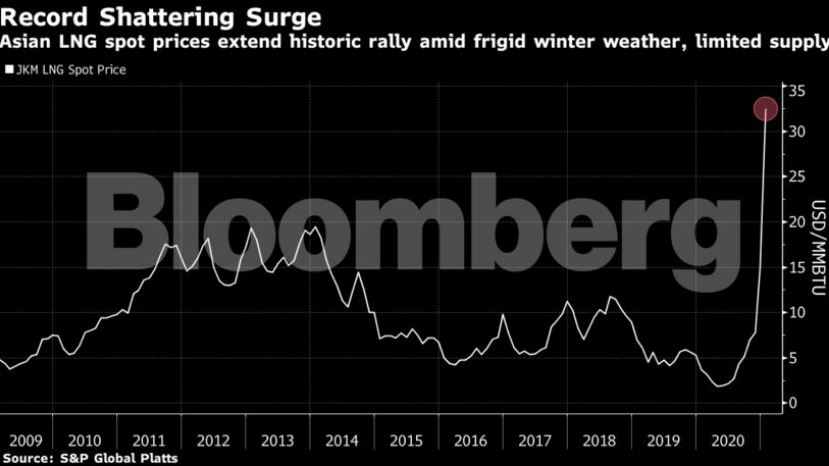 “The LNG market is the winner in this rally, and the people who believe in it -- people who believed that, after two to three winters that were warm, something can happen,” said Sarah Behbehani, a veteran LNG trader and managing director at BEnergy Solutions DMCC in Dubai.

As is so often the case with natural gas, the primary driver in this dramatic market move has been the weather, in this case the fierce conditions driving demand in North Asia. In Japan, which is reliant on imported energy, utilities Kyushu Electric Power Co. and Jera Co. are likely among the biggest losers after being caught short.

Efforts to divert more LNG tankers to the Pacific have come up against congestion on the Panama Canal. Since the start of December, 11 U.S. cargoes opted to use the Suez Canal instead and six chose the Cape of Good Hope, both of them longer routes, ship-tracking data on Bloomberg show. In the scramble for vessels, daily charter rates climbed to the previously unheard-of level of $350,000 a day.

“While there was evidence back in summer that demand could be strong this winter, I don’t think anyone could have anticipated how the combined effect of several different factors would move the market,” said David Thomas, an independent adviser and former head of LNG at Vitol.

To be sure, LNG traded on a spot basis is only a fraction of the overall market. Most of the fuel is supplied under long-term contracts that are often tied to crude oil prices. And no one expects current spot levels for LNG to last indefinitely: fuel for March delivery is trading already at half the rate for February.

“We believe as the market navigates through these challenges, prices will return to normal,” said Kalpesh Patel, co-head of LNG at Gunvor.

For now, the tightness in the market is welcome news for producers with extra volumes at hand, such as the Yamal LNG project in the Russian Arctic and the Gazprom PJSC-led Sakhalin-2 plant, according to traders. Yamal, a partnership between Novatek PJSC, Total and Chinese partners, is sending two cargoes to China via the Arctic Ocean this month, the first time the polar route has been used so late in the winter season.

Other likely beneficiaries include Qatar, the biggest and cheapest LNG producer, and Australian producers Woodside Petroleum Ltd. and Oil Search Ltd., which are located even closer to Asian consumers. Shell, the world’s biggest LNG trader, has spot volumes to play with outside its oil-linked long-term contracted cargoes, “as long as they are positioning correctly,” said Oswald Clint, an analyst at Sanford C. Bernstein.

Cheniere, the largest U.S. exporter, is another producer with spare capacity. Its Sabine Pass facility in Louisiana agreed last month to sell up to 30 spot cargoes during 2021. 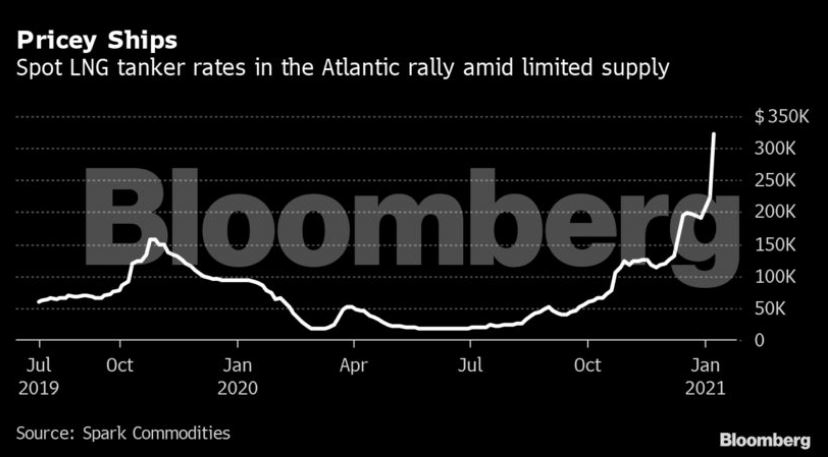 For commodity trading houses without their own LNG production facilities, the calculus is different, since they must buy and sell. Volatility is generally good for them, not only in terms of price movement but regional differences that allow them to move cargoes to the most attractive market.

“The world is not short LNG,” Richard Holtum, global head of LNG and gas for Trafigura, said in an interview from Geneva. “There is LNG available. The ships are simply in the wrong place.”

Shipping has emerged as one of the biggest constraints in LNG. BP last week paid $350,000 a day to charter a tanker taking a U.S. cargo. Trafigura recently offered to pay the same rate but without success, an indication of the shortage of available vessels. Trafigura, Gunvor and Vitol have all chartered more ships than they need and are benefiting from that, but scheduling is a challenge now, according to Per Christian Fett, global head of LNG at shipbroker Fearnleys.

“It’s a market slightly driven by fear,” Vitol chief executive officer Russell Hardy said. “We’ve reached a point where we’ve got largely an illiquid market. There are not a lot of buyers and sellers around.” 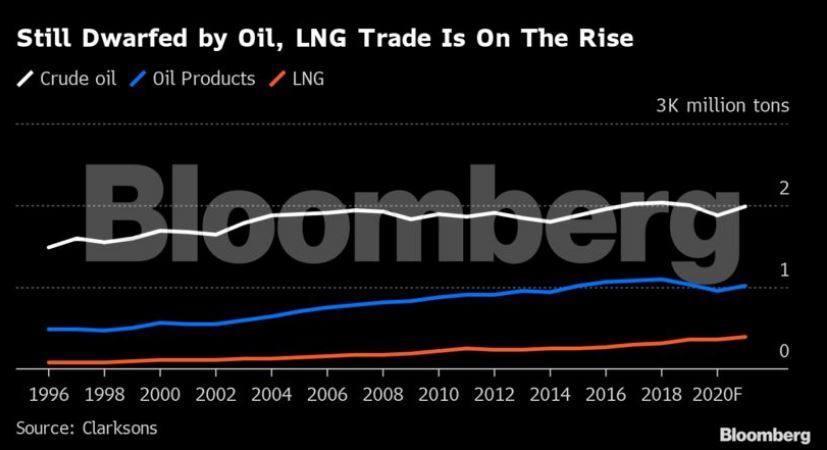 Still Dwarfed by Oil, LNG Trade Is On The Rise

Even as spot prices eventually subside, the rally may be a boon for companies seeking to develop the next wave of LNG export facilities. For Charif Souki, a co-founder of Cheniere who’s now trying to secure support for a $29 billion project in Louisiana, current market conditions favor deal making between U.S. developers and overseas utilities seeking to secure long-term energy supplies.

“What I’ve been saying for the past six months is that the system is tight, the oversupply is gone and we’re now in the danger zone,” Souki, the chairman of developer Tellurian Inc., said in an interview. “There’s only 50 million tons of LNG that are going to be built over the next five years. That’s not enough.”

— With assistance by Alaric Nightingale, and Guy Johnson

(Updates with comments from Vitol CEO in 18th paragraph)